The Good:
7 years and 6 months in the making, I very much anticipated my 50th Drupalcamp. As seems to happen at least one time each year, I flew straight from one event to another. I had my 2nd speaking gig at SxSw in Austin then flew directly to Chicago for MADcamp. I love the new name: Midwest Area Drupal Camp!

My Drupal 8 Live Demo at SxSw was well received. When I proposed the session, I thought for sure we’d be in a Release Candidate. As it turned out, Drupal 8 was only at Beta 7. I walked through demonstrations of creating content types and views and placing blocks with the new layout system. Matt Cheney joined in for a short but powerful demo of Configuration Management. Over 20 Attendees followed along with their Pantheon instances which were built directly from Drupal 8 HEAD. This gave us FAR FEWER bugs than Beta 7 contained.

My Pantheon training class at MADCamp in Chicago went very well. We were converting configuration to code via features and committing the code to the repository, then pushing it up the deployment chain. As is always the case, the attendees marveled at how a modern Development Operations workflow could be achieved without being a sysadmin or paying for multiple servers and glueing them together with scripts.

The Bad:
About 9:30 on Saturday 3/14, The Only Real Pi Day Of Our Lives, I was walking in downtown Austin on 6th street and got me left foot hooked into a storm drain as I navigated the curb back up to the sidewalk. I went down FAST and planted on my side with my left arm fully extended. Those nearby heard the THUD and rushed to help. I got right back up. Brushed off some sidewalk debris and marveled that nothing hurt and there was no blood! End of story… Not quite…

The Ugly: [VERY UGLY]
As the goose egg swelled up near me left elbow, I applied ice to it throughout the night. It took on some gnarly colors and would swell back up if the ice wasn’t directly on it.

The next day, still no pain, but it looks horrible. On the phone, my wife insists that I go to an urgent-care facility, so off I go. 3 x-rays later, no breaks or fractures are visible. End of story… Not quite…

Wednesday [4days after the fall] I wake up to fly out to Chicago. My entire left forearm has taken on every sickly shade of blue black and Burgundy! By that evening, my hand is welling up as well.

Thursday I teach the Pantheon class all day and don’t think much about my arm. After all, IT NEVER HURT! But by Thursday night I have TWO purple fingers and a third on the way. I’m afraid to go to bed at 1am, so I head for the Cook County ER in Chicago. They draw blood to test for an infection and x-ray e again. No breaks or fractures. It is explained that I have a lot of blood pooling up beneath my skin and it's going to take some time to heal. They send me home.
Arriving at the hotel about 5:30, I clean up, take 2 Ibuprofen PM and fall asleep at 6am. The phone wakes me up at 8am. Somehow I left the ringer on AND was able to fumble around with it and answer it. It’s the same Doctor that saw me in ER. He says my platelet count is slightly elevated and he’s afraid I may actually have an infection. He tells me to get back to ER pronto! I ask if I can sleep it off first. He says NO.

I’m back at ER within the hour. More blood work, more x-rays, this time including chest, shoulder, arm, hand, and leg. Many hours later [sleeping on and off] the x-rays and blood work look fine. I’m back at the hotel. My wife is in a panic over it all and asks that I catch the next flight home to Indy. They’re all booked so I grab one the next day.

My 50th Drupal Camp included an awesome dinner for the out-of-towners, one full day of training, an amazing pre-camp dinner, 2 ER visits, and only a couple of hours at the actual camp. I stopped in to say HI and BYE. Oh well.. At least dinner that night was amazing Greek food with good friends.

Hand still swells up badly if not iced. I haven’t been able to use my left hand much for 36 hours. I can’t even make a fist.

The alien coloring of my left forearm is fading slowly. The goose egg by my elbow is as goose as it has ever been. TWELVE DAYS after the fall?!?!?

Doc says, wait it out. The body will heal itself over time. 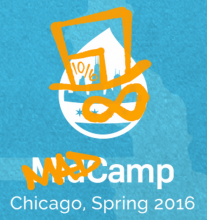 Here’s to hoping that my next MADCamp is
WAY MORE BORING than my 50th DrupalCamp!