DrupalCamp South Carolina review then off to Microsoft Headquarters 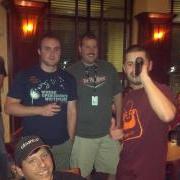 While my favorite part of the whole gig was the late Saturday night performance by the perennial nerdcore artist DualCore [pictured left], there was plenty of Drupal going on as well. Drush, Drush-make, Features, CiviCRM, Module development, Theming, Workbench, Aegir, and more were on board.  My beginner sessions garnered a nice crowd. I'm still amazed at the number of people who keep traveling far to get their hands on live Drupal training. I even saw some familiar faces from the Indiana Linux Fest where I gave some beginner sessions a few months ago. What was really exciting about all this was that I didn't know over 1/2 the presenters. I made a point to give everyone that submitted a session at least one time slot. I even had to expand from last year's TWO track format to add a third. Thus, I missed most of the sessions. I can't wait to see the videos that will be eventually released.

We're already making plans for DrupalCampSC 2012 for June10th. Same place and once again in conjunction with SouthEastLinuxFest. Visit the Groups.Drupal.org Post to keep up with what's going on.

AND, stay tuned for more news on the DrupalCamp I'm putting on at OhioLinuxFest on Sept9th!

I'm typing this from Midway Airport in Chicago during my layover on route to Seattle to eventually arrive in Redmond home of the headquarters of Microsoft. They have invited a hand full of OpenSource engineers for an all day event they have named WebMatrixFest. They will be showing off some of the new features of the 2nd release of WebMatrix which is an all in one installer for local hosts on Windows environments. It also includes an IDE for module development. They will also be listening to us as we share information about our workflow and best practices as they seek to offer more free tools to web developers. It should be a pretty exciting time that will make for an excellant blog post afterwards!